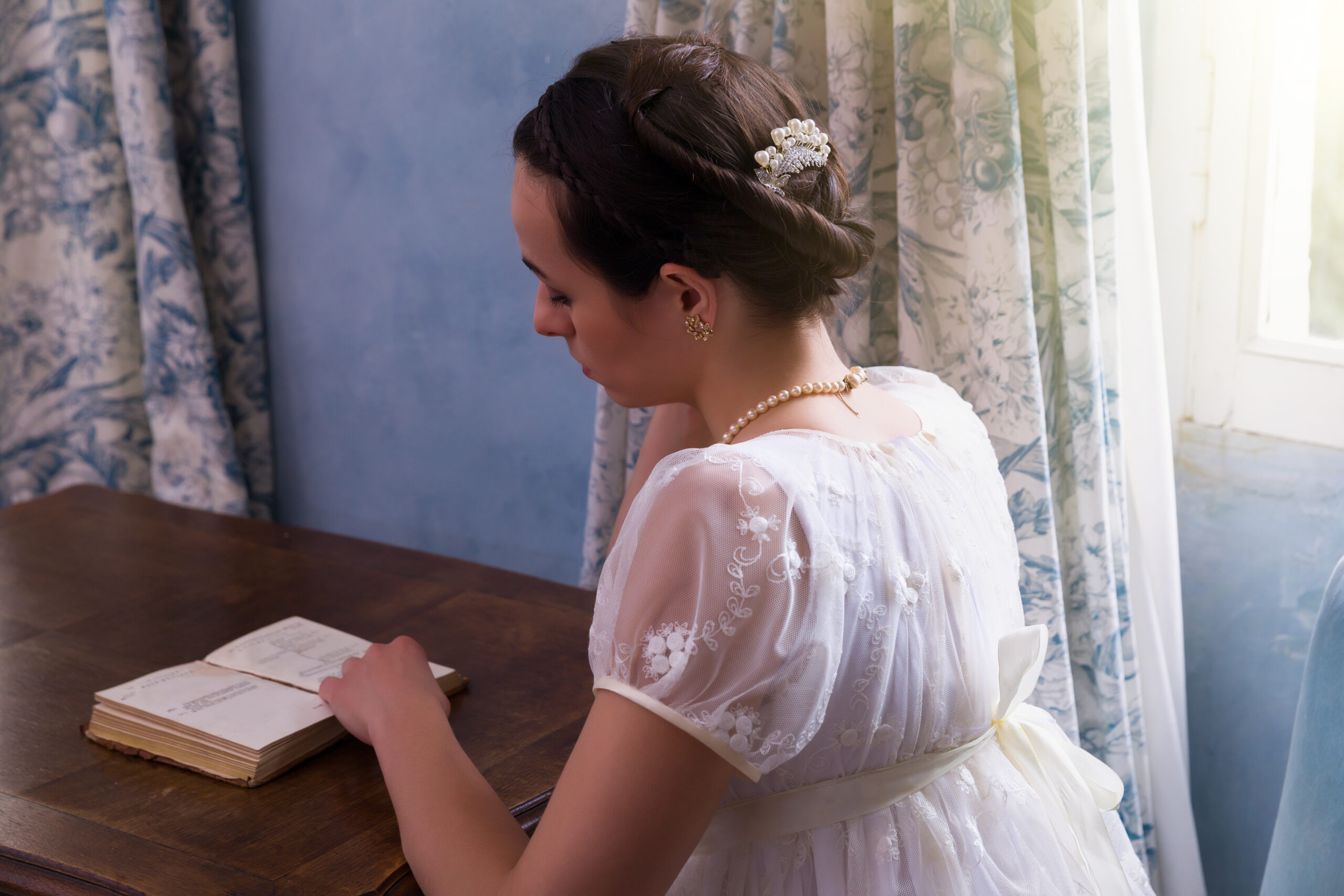 My latest novel – a Pride & Prejudice anthology – is well on its way to being completed is now available to read as “Pride, Prejudice, & Permutations” on Amazon!

It was my NaNoWriMo project this year, and I still have a few stories left to finish. I’m hoping for it to be published in January sometime before the baby comes. We’ll see if these kids will let me do it!

I wanted to give y’all some peeks into what I’m writing, though. I’ve emailed out two different sneak peeks from different stories, which I’ll include here. I also wanted to give you the titles of the stories, along with some blurbs. I’ll update them as I go!

Now, bear with me, these are a bit rough and haven’t had polishing. I also don’t have a title for the entire book yet, so if anyone has suggestions, please don’t hesitate to comment below!

What happens when Caroline Bingley and George Wickham team up to force Darcy into a compromise? Laced tea, an accidental death, and an elopement!

Elizabeth looked frantically around the room, searching for aid. Mr. Bingley had slumped forward, his arms cradling Jane’s head with his face in her bosom. Neither of them made any sound. The same was true of Miss Bingley and Mrs. Hurst, who were collapsed in a heap on each other. Mr. Hurst remained in his prone position, his empty tea cup having fallen to the floor beside him, shattered into pieces.

“What on earth?” Elizabeth whispered to herself. “Are they all dead?”

This horrifying thought caused her to rush across the room and shake Jane slightly. She was relieved to see her sister’s chest rising and falling as though she were asleep. Mr. Bingley’s head rose along with her. Elizabeth desperately tried to move the man’s face away from her sister’s décolletage, but his neck refused to support itself and kept flopping back down.

Frantic with worry, Elizabeth ran towards the bell, hoping a servant could summon Mr. Jones, the local apothecary. Before she reached it, however, she heard the door open behind her. She spun around and saw an officer standing in the doorway.

She sighed with relief. “Mr. Wickham!”

Overhearings More to the Purpose

Mrs. Bennet happens to overhear Wickham and the other officers discussing her youngest two daughters in the crudest of terms. When her demands to Colonel Forster are met with the harsh truth, and her insistence to Mr. Bennet that he challenge the officers to a duel is mocked, how will she react?

No Less Brittle Than Beautiful

What happens when Lydia Bennet bumps into George Wickham, sending him crashing into the arms of… Mary Bennet. The resulting compromise at Aunt Phillips’ card party leads to a ruined reputation and a marriage neither of them wished for. Will Mary and Wickham be able to sort out their difference and find a happily ever after?

Keep Your Breath to Swell Your Song

The famed Bonnet Family Singers are known throughout the ton for their beautiful voices. Their performance for the Prince Regent threw them into the spotlight, but they have chosen to keep their identities a secret. The rumors say they are daughters of a gentleman, but no one knows for sure. All Mr. Darcy knows is that there is something a familiar about the way Miss Elizabeth Bennet sings at Lucas Lodge.

And Then the Murders Began

Netherfield has a reputation for being a haunted manor house. The rumors stem from two centuries of unnatural deaths and horror for each tenant that has resided there. When Elizabeth is invited to stay to tend to her sister Jane, she discovers a murder most foul. Will she and Darcy be able to solve the murder and break the curse? Or are they doomed to suffer the same fate as all the previous inhabitants?

When she turned back towards the door to head to her room, the light from Elizabeth’s lamp shone on a woman’s slipper peeking out from behind a settee. Not wishing for it to be lost under the furniture, she moved forward to pick it up and place it on a small table.

As she approached, Elizabeth noticed the shoe was actually on a foot, that was attached to a leg. A sense of dread welled within her, and her mind shouted at her to stop, but her body refused to obey. She peered around the sofa and let out a horrified scream.

If Only They’d Had a Son

What if Lydia had been born a boy? Lyndon Bennet has turned out quite wild, having been spoiled by his parents for being the heir who would save them all. What difference will his cruelty and indifference to his elder sisters make in their lives?

Nothing But Officers in Her Head

Catherine Bennet, aka Kitty, is known as being her younger sister’s shadow. But what if that was all a disguise to hide who she truly was – one of the most renown cryptographers of the Napoleonic Wars?

For I Am a Married Woman

William Collins discovered as a youth that with some polish and grooming, he could charm ladies as easily as the handsomest gentleman. When he arrives at Longbourn to choose a wife from his cousins, Lydia is taken in by his compliments and declares that she should be the one to be put forth as Mrs. Collins. Meanwhile, Mr. Collins finds a friend in George Wickham. How will the friendship between these two rakes change the story?

In His Nightcap and Powdering Gown

Mr. Bennet falls and bumps his head after mocking his wife for her fears of the hedgerows. When he awakens, he is just as flighty and unstable as Mrs. Bennet! Dressing in his nightcap and powdering gown, while calling for his salts, how will Mr. Bennet’s new personality affect the behavior of his wife and daughters?

Mr. Bingley is a man who is easily persuaded by the strong opinions of his friend and sisters. When he leaves Netherfield Park after hosting a ball, Miss Bingley sends Jane Bennet a letter, which Mrs. Bennet insists be read aloud at breakfast. Upon hearing that his fairest cousin has been abandoned, Mr. Collins offers a proposal of marriage. Mr. Bingley’s return six months later has him discovering a very different Longbourn than the one he saw before. What will he do now that he’s realized he yields too readily to others?

Punish Him for Such a Speech

Elizabeth Bennet is stuck at Netherfield, tending to her elder sister. Tired of being the object of disdain for both Mr. Darcy and Miss Bingley, Elizabeth gets her revenge in a unique manner – flirting brazenly with Mr. Darcy one evening as she and Miss Bingley take a turn about the room.  How will Mr. Darcy react?

And Then the Dragons Came

Rumors have hit Meryton that dragons have been spotted in the north, but Elizabeth Bennet is sure that the sightings are nothing more than hysteria. Plagued with migraines since her eighteenth birthday, she is struck down by one at the Meryton assembly, which prevents her from dancing. This is cruelly remarked on by Mr. Darcy, a newcomer to the neighborhood. Before she can confront him about his behavior, a dragon is spotted flying over the town, and everyone panics. How will the arrival of dragons change Pride & Prejudice.